Alive and sittin' (and rambling)

As for me, well it's mostly more of the same.  Here's the latest:

Due to some scheduling changes in my household, I have three mornings home alone.  I know some of you out there would think I'd be going balls to the wall with dressing.  I have been dressing more, but not like every possible minute.  You forget that I'm fairly lazy and some days that applies to not even having the oomph to dress cute.  But I will say that I've been taking decent advantage of the alone time.

After not taking decent advantage of this alone time for the first few weeks, I've gotten into a decent groove and actually have been trying to incorporate makeup at least once a week.  The thing is, I get a much better shave if I wait 2-3 days so if shave day aligns with other things like life stuff and my job, then it's a makeup day.

I had not bothered with makeup for like a decade.  No makeup other than lipstick that is.  Like any other skill, you just gotta start small and keep practicing.  Something clicked with me and makeup a year or so ago - keep it simple and have extremely low expectations.  That has served me well.  And as such, the handful of times that I've done makeup this year, I've actually enjoyed it.

One other thing that has really helped with the makeup is for me to get it organized.  I used to have the stuff in a bunch of little cosmetic bags stuff in a tote.  I never felt like digging through it.  The engineer side of me kicked in one day and I bought an organizer for the makeup.  I love this thing!  I can grab one thing and head to the bathroom to play.

Last week when I wore makeup it took me 17 minutes to apply it.  I was not striving for perfection.  The quality of my front facing camera on my phone is decent enough but is also bad enough to not show my flaws.  Case in point, I do not shave my legs.  I do have lighter color hair and keep it trimmed and with suntan or darker hose, it pretty much does not photograph.  Similarly, as long as I don't do a complete hack job on my makeup, it looks good enough for pictures.

Anyway, like I said, my makeup expectations are pretty low.  I know the basics from having a friend who was an Avon sales lady many years ago (her husband was a crossdresser).  In fact, she hosted a makeup party for handful of us from our Tri-Ess chapter.  I know enough of the basics to get by.  People are pretty complimentary of the results on Flickr which is very sweet, but I know I could do so much better.  I know that the more time I spend, the better I'll get at it.  In fact, the last time I put on eyeliner, I think it was actually pretty decent.  I have a hard time keeping still and steady for that.

The last time I had two classic blunders.  First, for some reason I poked my eye with the mascara.  The result of that was a tearing eye and I had to keep wiping mascara off my lower eyelid.  The second problem was that I decided to wing it and darken my brows.  A year ago I bought this brow kit which has a stencil so you can hold it on your brow and paint the proper shape.  Did I use that?  Nope, I never have.  I just grabbed an applicator and applied some dark stuff.  Well, they were more Groucho Marx than Julia Roberts.  Thank goodness I wear glasses, I think they hid much of that blunder. 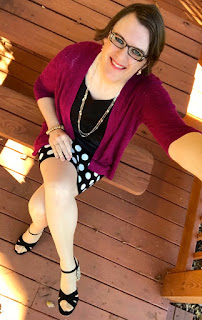 That's the other thing about my laziness with this stuff - did I wipe off the brows and start over?  Nope.  It wasn't too horrible, I just left it alone to get outside and take some pics.  They weren't that bad it turns out.

Speaking of taking pics, I take a bunch.  For those of you who do visit my Flickr page I'd like to know if I'm posting too many pics of a given outfit.  I try to limit it to at most 4 public pics and 4 friends only pics.  I only post that many if I'm really happy with that many different poses.  I don't want to wear out my welcome.

The other day my selfie stick was acting up on me.  When I came in I saw video recording.  Apparently, earlier when I started a video and clicked stop, it didn't stop.  So when I clicked start on for a second video it stopped the first.  Then when I thought I was stopping the second video it was starting one.  The second video was total garbage.  The first one is kinda funny so I posted it anyway.  And when I went to pull the pics off the phone, I saw that I had taken some 350 pics.  Really?  Am I that insane with my picture taking?  No, the selfie stick goofed up and shot 280 pics in burst mode.  LOL.

There was one very cool thing that happened.  After I came into the house to work for a little while, I decided to pour a cup of coffee, grab my phone and take a break outside on the deck.  You know, dressed up and in makeup.  I cannot believe I've never done this before.  I gotta tell you, it was glorious.  Just me, doing all the same stuff online on my phone, but out on the deck on a cool fall morning.  It was delightful.  In fact, I edited and posted a picture on Flickr while I was out there.  As I was sitting there I realized that not only is this good for my soul, it was good practice for being me out in the world.  I was imagining that I was having this cup of coffee at Starbucks.

With my alone time right now, a goal of mine is to get out into public again.  Ideally, I want to get on makeup and an appropriate outfit, go to Starbucks and enjoy my latte there.  I need to work up to that, the first time I'll just use the drive thru.  The next time I might order in the app and just walk in to retrieve my beverage and scoot back home (or stop at a park on the way home).  Eventually, I want to go in, order at the counter and then enjoy my beverage in the store.  The coffee break on the deck felt like a nice stepping stone for that.

I've only been out in public a handful of times in feminine mode.  I added to that this week on a whim.  A WHIM!  Long story short, I pi... 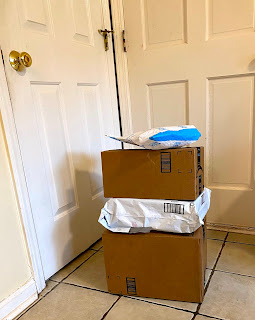